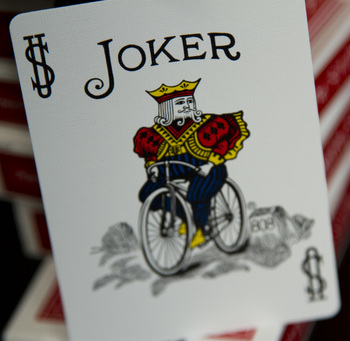 "Wild card, bitches!"
"Regimes may fall and fail, but I do not."
— Charles Maurice de Talleyrand-Périgord
Advertisement:

The Wild Card is so used to swinging between teams that they have no default "good" or "evil" Character Alignment or even a "home team." They truly aren't interested in consistently remaining with either side, and will very often simply want both to leave them alone. They can be the sort of person who will stay out of things entirely, until someone else (usually the hero or other sympathetic character) asks them for help.

The Wild Card doesn't care whose toes they stomp on, even if they're supposed to be the Wild Card's own team. In fact, The Hero probably got one (if they even manage to convince one) onto the team only because the Wild Card owes them big time. The Wild Card can really shake up a team — the more suspicious characters will quite rightly not trust them.

Unlike the mainstream neutral characters that don't join evil or good because of their preference of not assisting malevolent individuals accidentally, which they have a right to fear, Wild Card characters are instead dynamic in terms of their morality, which doesn't exactly make them truly impartial. The latter characters however, are truly impartial and rather morally static, meaning they stay loyal to what their overall morality is.

Wild Cards often share a few of these traits:

Sometimes Wild Cards fall in love. Love is the bane of the Wild Card, because no longer does the world revolve around one amazing and easy to understand person—there's somebody else. Oh my god, What Is This Feeling?! Knowing how erratic the Wild Card can be, it could be somebody from either team—or both. With somebody to care about, the Wild Card may well become more reliable for a team. Or if there's multiple people to care about, they may become less reliable. There are also some Wild Cards who became what they are because they fell in love with someone.

Neutral characters of the said three neutrality alignments can qualify as this (with Chaotic Neutral being more notorious with this trope, but because neutrality is by definition not joining either side, this is by no means a guarantee). Basically there are some neutral characters of the three impartial alignments that are deemed Wild Cards, while some others are not.

Wild Cards are very rarely Big Bads, though; they aren't really dedicated enough to evil—or to anything—to be that evil. However much they may enjoy doing what they do, most Wild Cards have either some form of morality, or high survival instincts, and are likely to turn on their evil employer because they were betrayed, don't want to be blown up with the planet, or even just because they just don't like being that evil. Wild Cards are more likely to be a Big Bad's poor choice of Bastard Understudy, or even the Good Team's Token Evil Teammate.

While the average Wild Card sees their "friends" as a handy Bulletproof Human Shield, they have just enough conscience to feel bad about abandoning them when the fight turns ugly. No Wild Card switches teams because they care about their friends—they switch teams because it means a better life for them.

On rare occasions, a Wild Card may unexpectedly pull a sudden act of Heroic Sacrifice, though it'll likely be because they guessed that if they didn't sacrifice themselves, they'd probably die anyway—along with everybody else.

Or they might not. Wild Cards are just that unreliable.

Particularly wild Wild Cards tend to fall under For the Lulz and Chaotic Neutral.