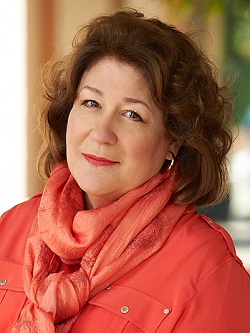 Esteemed Character Actress Margo Martindale (born July 18, 1951 in Jacksonville, Texas) is an American film, stage, and television actress. As comfortable playing cold-blooded villains as she is playing folksy mothers, chances are you know her face if not her name.
Advertisement:

Although she's given many great performances in film and tv, her Star-Making Role came in the form of FX's Elmore Leonard series Justified, where she earned critical acclaim as the complex yet terrifying drug kingpin and criminal matriarch, Mags Bennett. The role won her numerous awards including an Emmy and a Critics' Choice Television Award; her appearance in Season 2 is widely regarded as a series high point.

No relation to Ann Dowd

, beyond being actors who came to prominence in 2010s TV shows.