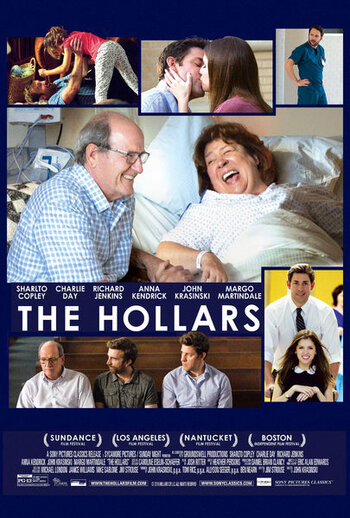 "Don't waste your time on the bad. Live with the good."
"It's terrifying to find out this late in your life what you should have done."
Advertisement:

The Hollars is a 2016 dramedy film directed by John Krasinski and written by James C. Strouse.

John Hollar (Krasinski), a struggling graphic novelist living in New York City, is forced to come back to his hometown after his mother Sally (Margo Martindale) has a brain tumor, and joins his father Don (Richard Jenkins) and brother Ron (Sharlto Copley) to stay by her side.

Besides Sally's brain tumor, the rest of the family has their own personal problems: Don's business is failing and about to go into bankruptcy, John is about to have a child with his girlfriend Rebecca (Anna Kendrick), and Ron wants to reignite his relationship with his ex-wife Stacey (Ashley Dyke), even though she has a new boyfriend, Dan (Josh Groban).