The Patient Has Left the Building 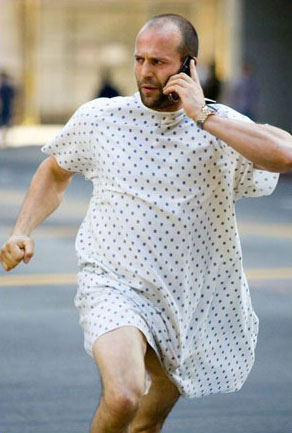 You'll have to speak up, I'm wearing a gown.
Dr. Hayward: You're not going anywhere!
Special Agent Dale Cooper: Doc, when the will is invoked, the recuperative powers of the physical body are simply extraordinary.
— Twin Peaks
Advertisement:

Doctor's Orders are powerful things, often able to keep even the most badass characters in line... but not this guy!

Whether he's just woken up from a Convenient Coma or the surgeon has just finished stitching him up after getting the bullet out, the medical advice — either straight from the lips of The Medic or suggested by a concerned loved-one — is for him to rest up and hang around for observation in case of complications or side-effects. But no, Heroic Resolve will see him through.

To qualify, there should be someone arguing the case that the patient should stay in bed, or an obvious attempt to evade hospital staff as he sneaks out. If he just gets up, grabs his coat and waves to the nurse on his way out, it's not this trope.

Said patient will often Pull the I.V.. It may also happen if the patient is Afraid of Doctors. Potential visitors will most likely be told that the patient is No Longer with Us.

See also You Can Barely Stand, I Can Still Fight!, Just a Flesh Wound.