Where the Hell Is Springfield? 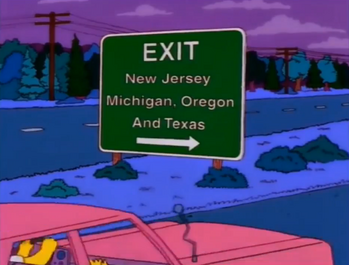 Each of these states are hundreds, if not thousands of miles away from each other.
"It's a bit of a mystery, yes, but if ya look at the clues, you can figure it out."
— Lisa Simpson (being unusually cryptic), The Simpsons, "Blame It On Lisa"
Advertisement:

The location of the city, state, region or sometimes even the country in which a work is set is never revealed or intentionally hidden.

It’s most often used as a Running Gag, but it can also be used in drama to create an atmosphere of mystery and uncertainty. Leaving a location unspecified can help it serve as a geographic Audience Surrogate. It can serve to create a City of Adventure (if only because very few real locations have every possible thing to see and do). Other times, the writers simply never see a reason to bring it up.

Creator Provincialism and No Communities Were Harmed come into play if the location is vaguely based on a real place, but here the difference is that the creators can also play fast and loose with the accuracy. Nevertheless, fans will still sometimes go to extensive effort to piece together clues and pin down the location, which usually just leads them to conclude that it’s set wherever it was filmed.

The trope is named after Springfield, the hometown of The Simpsons, which even has its own Separate Simpsons Geography Thing. “Springfield” is one of the most common namesnote  34 cities, 3 unincorporated communities, and 12 townships (nine in Pennsylvania!) for towns and cities in the United States, so the name serves as an indicator of an Everytown, America.note Although if you are wondering, the city with the most legitimate claim (if you can call it that) is Springfield, Oregon, as the show's creator Matt Groening is from that state and has used many elements from Oregon as inspiration.

Compare City with No Name, Everytown, America, and Fictional Province. Contrast No Communities Were Harmed and Canada Does Not Exist, where the setting is based on a real-life location but never outright identified, and Informed Location, in which the location is clearly specified. If the place is given a generic Mathematician's Answer of a name, then its a Business of Generic Importance. The temporal version of this trope is Ambiguous Time Period.

open/close all folders
Eastern European Animation
Fan Works
Music
Myths and Religion
Professional Wrestling
The whole concept of Parts Unknown with all of its different "communities" would seem to apply here, especially because wrestlers from these places are never shown "there". Because of Kayfabe, it's never explained how these wrestlers get paid, how they get home, if they have passports, etc.
Puppet Shows
Radio
Theatre
Visual Novels
Web Animation
Webcomics
Web Original
Other
Feedback

Finding Springfield on a map

Homer points to the wrong spot on the map, so Lisa corrects him... but then Bart gets in between the map and the viewers.

Finding Springfield on a map

Homer points to the wrong spot on the map, so Lisa corrects him... but then Bart gets in between the map and the viewers.