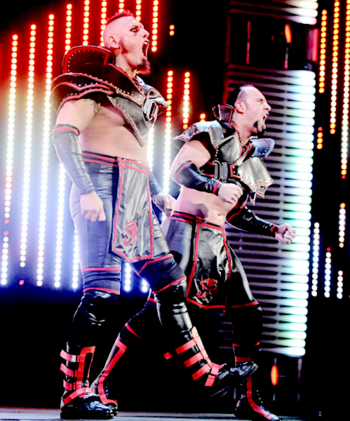 Welcome... to the Wasteland.note From left to right: Konnor and Viktor
The Ascension is a professional wrestling tag team (formerly stable) signed to WWE. It consists of Eric "Viktor" Thompson and Ryan "Konnor" Parmeter.
Advertisement:

The stable was originally introduced in FCW as the brainchild of Ricardo Rodriguez, the personal ring announcer of Alberto Del Rio. The stable consisted of Conor O'Brian, a former rookie on the NXT competition and protege of Del Rio; Kenneth Cameron, a British professional wrestler more known today as the ex-husband of WWE Diva Charlotte and for his stint in TNA as Bram; Tito Colon, later known as former WWE Tag Team Champion Epico and Fernando of Los Matadores; and Raquel Diaz, the daughter of Eddie and Vickie Guerrero.

Video packages introduced The Ascension with a dark gimmick similar to The Undertaker's Ministry of Darkness. Unfortunately, the group was short-lived, as O'Brian was injured, Colon was called up to team with his cousin on the main roster, Diaz became Queen of FCW, and Rodriguez was preoccupied with his association with Del Rio. Cameron would maintain the Ascension gimmick by himself heading into 2012, until O'Brian returned to reform the union as a tag team just in time for the transition from FCW to NXT. Despite quickly gaining momentum on the remodeled developmental brand, the team's run was abruptly interrupted as Kenneth got in trouble with the law and soon found himself back in the indies.

Like Kenneth before him, Conor continued on with the Ascension gimmick as he ran solo until fellow developmental star Rick Victor, long inactive due to injuries of his own, resurfaced and joined with Conor as his partner in 2013. The Ascension quickly captured the NXT tag team championships and had the longest reign in the title's history to date, having their ring names shortened and tweaked to Konnor and Viktor respectively. They were quickly promoted to the main roster afterwards, grabbing a new gimmick calling back on the Mad Max-inspired teams of the 1980s like The Road Warriors and Demolition.

They were released from WWE