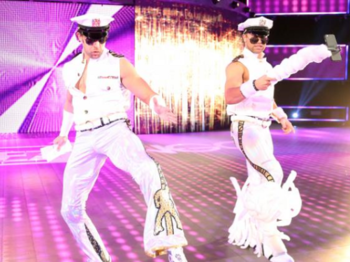 You have the right to remain stylish.
Advertisement:

Breezango is a professional wrestling tag team consisting of Tyler Breeze and Fandango, who worked for WWE on its NXT brand. Initially both Breeze and Fandango were tagging with R-Truth and Goldust, respectively, with both teams engaging against each other in several matches, but during one of them Goldust and R-Truth refused to attack each other, leading to their partners turning on them and teaming up with each other. At Money in the Bank 2016 a match between Breezango and the Golden Truth was scheduled, but Goldust messed with their opponent's tanning machines, causing severe burns that led to Breezango losing the match.

During the second brand extension, both Breeze and Fandango were drafted to SmackDown to form its tag team division, but they were almost on the bottom of the totem pole, being utterly demolished by face tag teams, until they started to undergo a slight gimmick change into "fashion police officers", and slowly, but surely, they attracted the audience's attention by starring in comedic skits based around their new gimmick, eventually turning face.

After Fandango was sidelined by an injury in 2018, the team was shelved and Breeze was taken off TV, until being returned to WWE NXT in 2019. In July, Fandango rescued Breeze from a beatdown by The Forgotten Sons, reuniting Breezango in NXT. On the August 26th 2020 episode of NXT they defeated Imperium to become NXT Tag Team Champions.

Both members of Breezango were released from WWE in June 2021.

These tropes make sure your Day One Is H: