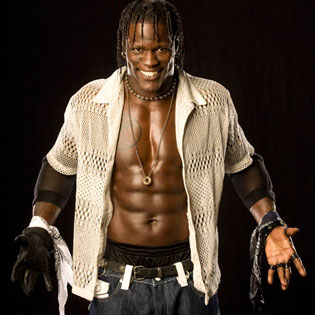 WHAT'S UP!
"The truth has set me free!"
Advertisement:

Ronnie Aaron Killings (born January 19, 1972) is an American professional wrestler, rapper, and actor. As a wrestler, he is better known by his ring name, R-Truth (previously K-Kwik and Ron "The Truth" Killings). He has wrestled in TNA and more famously WWE, where he is a one-time Tag Team Champion, a two-time Hardcore and United States Champion, and a (last time we checked) 53-time 24/7 Champion. His career started in 1997.

Tropes associated with the C-O-N...SPIRACY include: