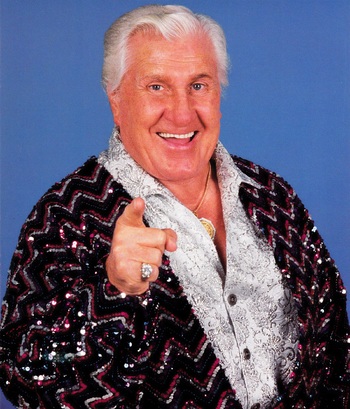 Frederick Kenneth "Freddie" Blassie (February 8, 1918 – June 2, 2003) was an American professional wrestler and manager best known for his work in the World Wide Wrestling Federation, later known as WWE. Blassie was inducted into the WWE Hall of Fame in '94.

The Wise Men (Blassie, Captain Lou, and Ernie "Grand Wizard" Roth) managed the heels in the 70s and early 80s. "Classy" Blasse was a cane-wielding Man's Man who could beat up Yakuza members. If you were a heel and being managed by the Terrible Trio, you were guaranteed to get booed out of every building, every night, in any town.

With the exception of Roth, each wrestled before they became managers. Blassie in particular had a long, storied career, becoming the top heel in Los Angeles for a long time. Worked a lot of very bloody matches, and was considered one of the great brawlers of his day. He had so much heat that it was reported that he gave viewers heart attacks in Japan after a match in which he drew blood from Japanese wrestling icon Rikidozan. That's right, people literally died from his heat. The man was stabbed a few times and even had acid thrown at him because of his heel work. He was so hated that at one point, fans torched his car. Someone from the Rat Pack nearly murdered him backstage for the stuff he said about Bruno Sammartino. His legacy can still be felt in the manga Tiger Mask, in which he darkly figures.

Blassie is the subject of My Breakfast with Blassie, a low-budget parody of My Dinner with Andre (co-starring Andy Kaufman as his wrestling persona). Apart from his wrestling career, he recorded a novelty song called "Pencil Neck Geek", which was popular on The Dr. Demento Show.

He was inducted into the WWE Hall of Fame in 1994.

"Read my tropes, you pencil-neck geeks!":