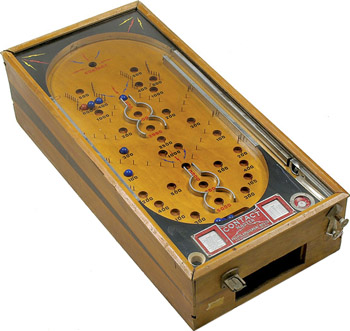 If Baffle Ball is the Space Invaders of Pinball, then Contact is its Galaxian — it took the ideas of its breakthrough predecessor to the next level, injecting technological improvements that quickly spurred a raft of imitators.

In 1933, Harry Williams was trying to make money by inventing arcade games for sale. In the two years since the release of Baffle Ball, "pin games" had evolved from simple boxes with holes and nails to fairly complex mechanical marvels such as Rockola's World Series. Harry had recently produced Advance, a modest success, but needed something bigger to stand above the crowded field.

Inspiration struck when Harry decided to use solenoids, or small electromagnets, in his game — if the player could shoot a ball over the top switch, the solenoids would kick out balls in low-scoring holes so they could drop into higher-scoring holes underneath. After finding a solenoid manufacturer next door to his own plant, Harry partnered with Pacific Amusement Manufacturing to sell the games. Williams called his new game Contact after the electrical "contact" (switch) to initiate the action, and included three dry cell batteries ("good for months") to power the game.

Contact did well at first, but Pacific Amusement soon updated the game with a doorbell that rang whenever the player hit the Contact switch, and Williams added a "Tilt" mechanism to prevent cheating. These innovations turned the game into an instant success, as the ball-kicking action and tilt sensor challenged skilled players, and the clacking solenoids and ringing bells drew in spectators. Orders soon overwhelmed Pacific Amusement's Los Angeles plant, and they opened a second plant in Chicago in April 1934 to meet demands. When that was still insufficient, a nearly-identical game called Lightning was licensed to Exhibit Supply Company. Even so, imitators soon followed, and it is estimated that over 33,000 Contact games in various forms were made.

As for Harry Williams, the success of Contact elevated him almost overnight to a major player in the industry, and he followed it with numerous other innovative mechanisms and game designs. By 1938, the mere mention of Williams' name became a major selling point in advertisements, and eventually led to the creation of Williams Electronics.