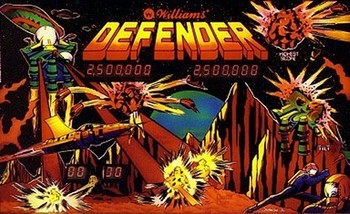 Defender is a Physical Pinball Table designed by Barry Oursler and Joe Kaminkow, and illustrated by Constantino and Jeanine Mitchell. It was released in 1982 by Williams Electronics as a Pinball Spin-Off of their popular Defender arcade game.

While other Licensed Pinball Tables of the time simply themed a generic table with the licensee's images and ideas, Defender attempted to replicate the video game's rules and structures into a pinball paradigm. In each wave, the player must protect ten Humanoids from being abducted by Landers and turned into Mutants; take too long to destroy the Landers, and Baiters will pop up from the playfield to thwart your shots. Hit the Pods to access the Warp target, then shoot down the Swarmers to open the Stargate. Skillful players will judiciously use Smart Bombs to destroy all enemies, while a well-timed press of the Reverse button will save wayward balls from draining down the left outlane.

Defender was released at a time when pinball games were on the decline, and Williams only managed to sell an anemic 369 tables.