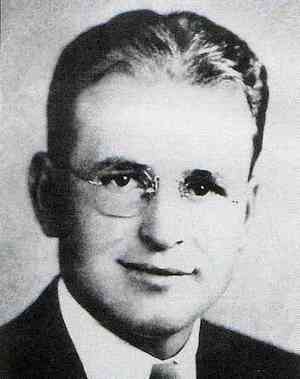 The Patriarch of Pinball
"The ball is always wild!"
Advertisement:

Harry E. Williams was one of the early pioneers of pinball, an inventor, entrepreneur, and designer of over a hundred and fifty arcade games and game mechanisms. He has often been bestowed with titles such as "The Father of Pinball" and "The Thomas Edison of pinball," imperfect attempts to encapsulate the exceptional role he had on the industry.

Born in 1906, Harry graduated from Stanford in 1929 with a degree in Engineering. He had gone to Hollywood with plans to produce advertising films, but the stock market crash left him abruptly scrambling for a job. While he was trying to distribute ball-and-bat games at Universal Studios, he saw a crowd in the lunchroom lining up to play Yohio's Whiffle pin-game. Unable to afford his own games to distribute, he started Automatic Amusements Company and made his own copy, Advance, instead.

Advance was a modest success, but for a more impressive followup, Harry opted to use battery-powered solenoids and designed the world's first electro-mechanical pinball machine. Contact featured two solenoid capture holes that, when the player hit the Contact Switch, kicked out balls into higher-scoring holes. He partnered with Pacific Amusements Company to sell the games; the addition of bells and a tilt sensor turned the game into a sensation followed by numerous copycats. Harry continued to design and create more game ideas, which helped carry arcade gaming through The Great Depression and elevated him to a major industry leader. By 1938, Harry Williams' name was influential enough to became a selling point in advertisements.

When World War II broke out, Harry Williams and Lyn Durant formed United Manufacturing, which reconditioned and redesigned older games for military rec centers. Williams left United after the war and started Williams Manufacturing Co. in 1944; their earliest games were a fortune-telling game called Select-A-Scope, a shooting game called Periscope, and Sunny, a flipper pinball game. Pinball games proved to be Williams' bread and butter, and the company's wares served as a respectable alternative to games from Gottlieb and Bally.

In 1959 Consolidated Drug Company bought out Williams Manufacturing, and Harry decided to retire, appointing Sam Stern as company president. Williams enjoyed himself in California for fifteen years, but briefly returned in The '70s, designing over a dozen games for Bally, Williams Electronics, and Stern Electronics in that time.

Harry passed away on September 11, 1983 in Palm Springs, CA due to complications from cancer, leaving behind dozens of patents, over 180 games to his name

, and a place in the annals of pinball history.

Games designed by Harry Williams include: