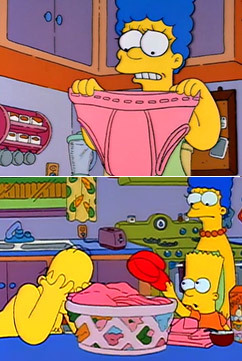 Hat's off to you, Bart. You ruined an entire load of laundry.
"Put one red thing in a load of whites, now everything's pink."
— Mr Incredible complaining about househusbandry to Edna Mode, Incredibles 2
Advertisement:

Unless a red sock ended up in the wash. Now you have pink.

Used to be Truth in Television (and in some cases still is), and the reason why this trope happens is a fairly simple one: coloured clothes can have excess dye on them (especially if they're new or aren't washed very often), and even small amounts of dye become obvious in lighter clothes. If the two are washed together, there's a risk that some of the dye will be washed off and stain the lighter clothes.

Although this can happen with any combination of darker and lighter colored clothes getting washed together, the 'red clothes staining white clothes pink' example is by far the most frequently used and well known version. Mainly because Pink Is for Sissies, much to the horror of the macho man or tomboy owner of the recoloured garment (especially if they already got themselves in this mess by "reducing" themselves to doing their own laundry, or are being forced to do A Day in Her Apron for some reason).

Something of a Dead Horse Trope, due to both the invention of better dyes and colour-fast detergents (which were made to mostly avoid this trope, much to the relief of fans of striped clothing everywhere), and the fact that wearing pink isn't as much of a big deal anymore; in fact many clothing stores sell salmon pink shirts as a legitimate option, regardless of gender.

Compare Shrunk in the Wash.

The iconic CN City Bumper of Samurai Jack and Johnny Bravo at the Laundromat.

The iconic CN City Bumper of Samurai Jack and Johnny Bravo at the Laundromat.