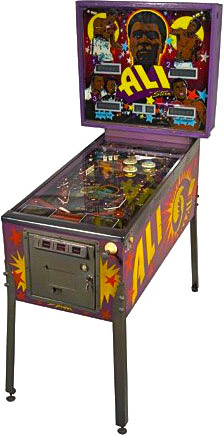 "The K.O. Action of Ali!"
"You gotta be tough to take on me,
But only the best can whup Ali!"
— Muhammad Ali
Advertisement:

Ali is a Licensed Pinball Table that pays tribute to the legendary boxer Muhammad Ali. It was designed by famed pinball designer Harry Williams and released in 1980 by Stern Electronics.

Like Muhammad Ali himself, this is a fast, bombastic game that never lets players forget who they're up against. The table is festooned with famous Ali-isms, such as "I am the Greatest", "Three-Time Champ", "Ali Shuffle" and "Rope-A-Dope", all drawn with comic-style pop lettering. The center of the playfield has a portrait of Ali pointing at the player along with a facsimile of his signature, while the backglass features the boxer's face surrounded by his form in the ring. The game also supported the then-new Susan B. Anthony dollar coin, and gave players an extra game for using one.

Aside from being one of a handful of pinball machines themed after an individual athlete, Ali is memorable for being one of the few Stern pinball games that was actually designed by Williams Electronics' founder Harry Williams.

"The roar of the crowd, the flashing of light,
At the ring of the bell you've got a fight!"