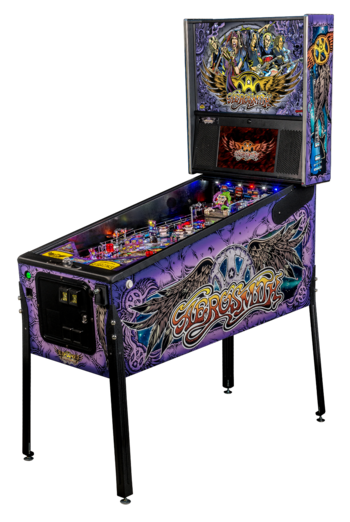 Aerosmith is a pinball machine released in early 2017 by Stern Pinball. It was designed by John Borg, with software by a team including Lonnie D. Ropp and artwork by "Dirty Donny" Gillies. Notably, it also features voice work from Brendon Small as the living jack-in-the-box "Jacky".

The game is themed around the famous rock group of the same name – specifically, it's touted as "reflect[ing] the high-energy and excitement that accompanies the experience of a live Aerosmith concert." As the band plays on, the player must get through nine modes based on their songs, including "Rats in the Cellar", "Dude Looks Like a Lady", "Sweet Emotion", "Walk This Way", "Last Child", "Same Old Song and Dance", and "Back in the Saddle". The other two are multiball modes tied to prominent mechanical features on the playfield. First, locking balls in the toy box on the playfield (through an airborne kicker) eventually starts Toy Box Multiball, based on "Toys in the Attic" – the player can delay the mode in order to increase the number of balls from three up to six. Second, "Love in an Elevator" is associated with a molded elevator that varies between the game's versions – in the basic Pro version, it's simply a fancy scoop, while the Premium and Limited editions upgrade it to a larger model on an exclusive upper playfield. Making progress in all of these modes is required for Medley Multiball, and completing them lights the way to the potentially lucrative Final Tour.