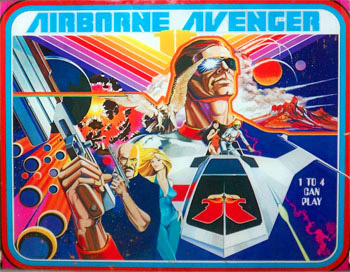 Airborne Avenger is a Physical Pinball Table released by Atari in 1977. Illustrated by George Opperman, it is notable for being the first pinball game created by famed designer Steve Ritchie. Only 350 units were made in total.

The implied premise for the game reads like a pitch for a Summer Blockbuster movie: the Airborne Avenger takes to the skies in his flying one-man jet-sled to challenge his evil nemesis and stop his schemes. Battle an army of hang-gliding minions and dodge anti-aircraft fire, then hit the captive ball target on the table to continue the battle.