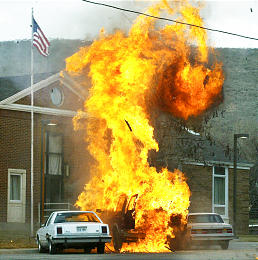 Mmm-mmm—mmm-mmm-mmm! Toasty!
"Whenever there seems to be a dull, quiet or otherwise non-car-filled moment, [director Justin Lin] likes to believe that filming a bunch of cars exploding will distract the audience long enough to forget that these movies are objectively terrible.
I sort of hate that he's right."
— Cracked reviews the trailer

First rule of Hollywood: "Anything can explode".

There is a pretty good chance the audience has already seen something blow up at least once during a typical day of television.

Note, however, that while we mere mortals react to explosions with some combination of shock and awe, if the folks on-screen are not so close to the blast they're surfing the shock wave away from the epicenter, they'll probably be strolling off coolly in slow motion

, not even deigning to turn their heads to acknowledge things going to Hades behind them. From this, we can also infer that if one does not grant an explosion power by looking at it, it cannot strike you down with a piece of shrapnel. If they foolishly glance at an explosion, they may still survive by running from it and jumping, but are much more likely to get killed.

Note that Reality Is Unrealistic. Explosions in real life don't typically create massive fireballs. When a bomb goes off, you get a big shockwave, the ground shakes, things are propelled through the air, windows crack, walls can fall down, people can get torn apart by debris or die without apparent injury, but no flames. Explosions are incredibly dangerous, but they don't look awesome. Hollywood adds fuel to their pyrotechnics so that you also get massive fireballs. Works that strive for realism will avoid this.

A Sub-Trope of Garnishing the Story.

If only some characters in a work use it, can lead to Follow the Chaos. Compare Kill It with Fire.

Alternative Title(s): Everything Is Better With Explosions, Baysplosions, Blowing Stuff Up