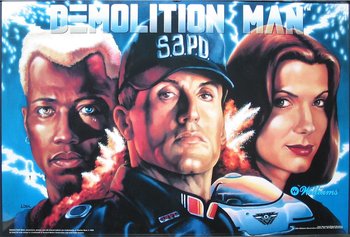 Demolition Man is a 1994 pinball game designed by Dennis Nordman and released by Williams Electronics. Based on the film of the same name, Sylvester Stallone and Wesley Snipes reprised their roles as John Spartan and Simon Phoenix for the game's custom callouts, along with quotes from the film.

This game was known for its emphasis on multiballs, which recreates the major fights between Spartan and Phoenix throughout the film. Its main features include the pivoting Cryo-Claw, used to select a mode or an award, and the two pistol-grip handles, which control the Claw, the flippers, and the plunger, as well as rewarding hidden bonuses with certain button combinations. Activate the five Cryo-Claw modes, wage battle across the Fortress, the Museum of Violence, the Wasteland, and the Cryo-Prison, then build up all seven Jackpots for the explosive finale.