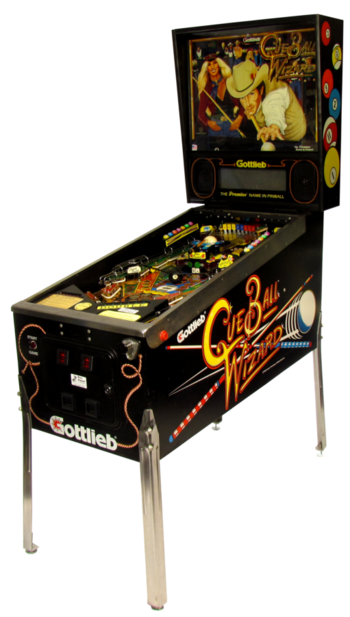 Cue Ball Wizard is a 1992 Physical Pinball Table designed by Jon Norris for Gottlieb (under the Premiere label), with illustrations by David Moore and Jeanine and Constantino Mitchell.

Unsurprisingly, a game called Cue Ball Wizard has a cue ball prominently featured on the table, along with an eight ball in an oscillating kicker on an upper playfield. If the player shoots the cue ball correctly, it hits a target on the kicker, which knocks the eight ball into an upper set of targets. This is used during 8-Ball Multiball; hit one set of targets (solids or stripes), sink the eight ball, then use the kicker during multiball to hit the upper targets for a Super Jackpot. Alternately, complete the six game modes on the Wagon Wheel for Pool Ball Mania, then finish it with a quick round of 9-Ball for a 500 million bonus.

Among pinball buffs, Cue Ball Wizard is well-regarded for its innovative playfield, tricky shots, numerous hidden bonuses, and smooth flow, a game that's not too difficult for beginners but fairly challenging for experts. If there is a downside, it's in the cartoonish sound effects and voice clips, which are too lighthearted to sell the game's "Urban Cowboy" motif. Regardless, Cue Ball Wizard became one of Premiere's best-selling tables of The '90s, a record it held until the company closed its doors.