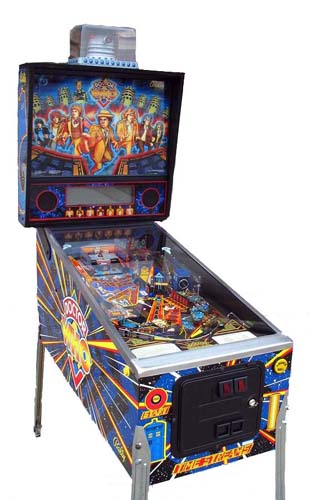 The Doctor Is In...note But The Master is back.
It's About Time
— Flyer slogan

Doctor Who (referred to in-game as Doctor Who: Time Streams) is a pinball game released in 1992, designed by Bill "Pfutz" Pfutzenreuter and Barry Oursler, and released by Williams Electronics (under the Bally label), unsurprisingly based off of Doctor Who. Unlike most pinball games, this table had rather complex rules and a plot that was not an excuse to show off the gameplay. Sadly, this was the game's downfall, as casual players were put off by the amount of effort it took to properly understand everything. On a lighter note, however, pinball aficionados have taken to the game in later years for this exact same thing.

Sylvester McCoy and Terry Molloy (the incumbent actors as the Doctor and Davros respectively) provided custom speech for this game.

The plot is as follows: The Master, desperate to get rid of the Doctor, teams up with Davros and the few Daleks he has left to destroy their shared nemesis once and for all. His plan is to use the "Time Expander", which can manipulate space and time events to interact with an entirely new time stream, to expand the Doctor's time stream to kill him. The main hurdle is trying to track down all of the Doctors (seven, as of the time of production).

Fortunately for him, the key is Earth. The Doctor likes to hang around Earth, and every incarnation of him winds up there at some point in time. With this in mind, the Master intends to expand Earth's time and push the planet into the sun, wiping out all of them at once.

Things don't go to plan, however, as the Doctors escape, but most of them end up trapped in certain places. Fortunately, the Seventh Doctor remains unharmed and has found the Time Expander. Now, he must reunite his past selves, return Earth's time to normal and confront the villains, ending with a final battle with Davros...

In-game, lighting each of the seven Doctors affects the gameplay in a distinct way. For example, the Third Doctor extends the time limit for spelling W-H-O (needed to light and collect extra balls), while the Sixth Doctor racks up scoring multipliers faster and keeps them in effect longer. The player can choose one at the start of each ball and can light more through various means, such as completing the Video Mode or building up Transmat power via the pop bumpers.

Every machine comes with a Dalek topper, and the first 100 units had one that moved during certain points in the game. This proved to be too costly to keep up, hence its discontinuation.

Oh, and Matt Smith, Karen Gillan, and Arthur Darvill once filmed an interview while playing the game.

The world is a funny place sometimes.

to bring the game to The Pinball Arcade. In December 2016, FarSight released an updated version of the table, subtitled "Master of Time". The plot: some people didn't like the resolution of the Time War plotline in The Day of the Doctor, and it turns out someTHING didn't like it either - the Whoniverse itself. Spacetime has started coming apart at the seams, and the Doctor's greatest enemies all have their own plans to exploit the rips and tears. The Doctors must work together to fix the mess they caused.

In July 2018, the original Doctor Who table was taken down due to their license to all Bally and Williams tables expiring. However, Master of Time is still available (due to it being predominantly made by FarSight themselves).

The Seventh Doctor: "I do not mind the brisk pace or a Dalek or two - it's the obstacles that I hate!"