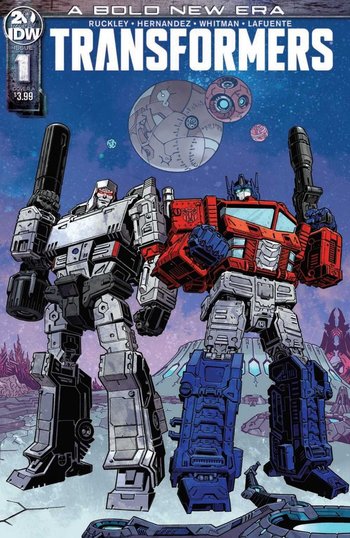 The world in your eyes...
"Your life is yours to shape. In doing so, you owe nothing to those who came before you. But you owe everything to those as yet unforged. Let no shaping of yours limit what they, in turn, might be and achieve."
— Termagax
Advertisement:

In 2005, IDW Publishing began a massive reimagining of one of the flagship franchises of the 1980s: The Transformers. It ended in 2018 with the inevitable confrontation with Unicron.

But as the old Furmanism saying goes:

And sure enough in 2019, IDW presents a new take on the Robots in Disguise as written by Brian Ruckley and illustrated by Angel Hernandez and Ron Joseph known simply as:

Many millions of years ago, Cybertron was not only peaceful and just, it was also an epic commerce hub for the cosmos! But even then, not everything was squeaky clean. Before Autobots waged their battle to destroy the evil forces of the Decepticons, they were keeping the peace to tame the rowdy forces of the Ascenticons and their shameless leader Megatron, whose rallies leave more than a few bots beaten up.

And matters only get worse when the planet is shaken to its core by its first murder in living memory...

In addition to the main series, which began in March 2019, several additional miniseries are set in the universe:

The comic, and all other IDW Transformers titles, will come to an end in 2022, after which IDW will lose the license to publish Transformers comics. The series was concluded in a 48-page special titled Transformers: Fate of Cybertron.

The tropes in your eyes: