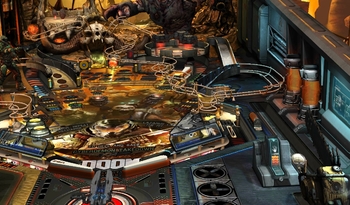 Rev up that chainsaw! Flip and tear, until it is done!
Advertisement:

Doom Pinball is a virtual Pinball Spin-Off and adaptation of the 2016 reboot of DOOM and is one of the three tables in the Bethesda Pinball collection, a premium add-on for Zen Studios' ''Zen Pinball 2'', ''Pinball FX 2'' and ''Pinball FX 3'', as well as a separate free-to-play app on mobile devices.

In this pinball game, you must tackle five missions, while slaughtering demon hordes along the way with not just a variety of weapons you can collect - but with the pinball itself as you bash it against up to three rows of sideways-moving demon targets. Once all five missions are completed, buckle up for an epic showdown against the dreaded Cyberdemon (instead of the Big Bad Olivia Pierce)! Win and you can score lots of points, then do the missions all over again and again...until your three balls are up.

Samuel Hayden: Well...that's it then. There is nothing else to be done.