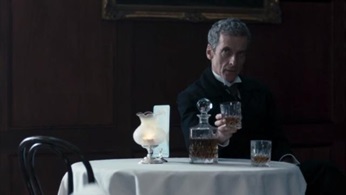 "I've got the horrible feeling I'm going to have to kill you. I thought you might appreciate a drink first. I know I would."
Advertisement:

Drinking game for Doctor Who:

General
One
Two
Three
Advertisement:
Four
Five
Six
Seven
Eight
War
Nine
Ten
Eleven
Eleven, being such a quirky Doctor, has a very long list, so be warned that it is not for the faint of heart and be sure you can hold your liquor before starting..
Twelve
Thirteen