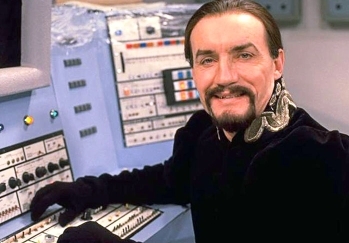 "I'm not a ham, a ham can be cured!"
— Anthony Ainley
Advertisement:

Anthony Ainley (20 August 1932 – 3 May 2004) was an English actor best known for playing the Master in Doctor Who during the final decade of its original run. His film career largely consisted of bit parts or small roles in films such as You Only Live Twice, Inspector Clouseau and Oh! What a Lovely War, though he got to play more substantial supporting roles in his last two films, The Blood on Satan's Claw and The Land That Time Forgot. His pre-Doctor Who television career included guest appearances on The Avengers and Upstairs Downstairs. Ainley's portrayal of the Master is generally regarded as being more over-the-top than that of Roger Delgado (who had originated the role) with the exception of his last televised appearance where his performance is more subdued. He played the Master one last time in the video game Destiny of the Doctors in 1997. Oh, and his dad, actor Henry Ainley, was Jon Pertwee’s godfather.