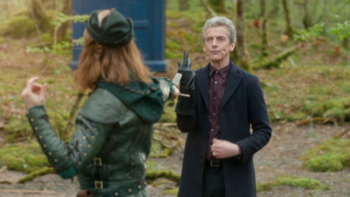 At least it's better than him swearing...
For a series that was originally conceived at least partly Edutainment series for a family audience, Doctor Who, especially in the new series, has snuck a few past the TV code (for the most part, these are from the 2005-present revival series; the original 1963-89 series tended to attract more concern about violence than innuendo).

The Smith Years
The Smith era (particularly with the Ponds around) is essentially a long series of dirty jokes with some time travel thrown in as a side dish.
The Capaldi Years
The Whittaker Years