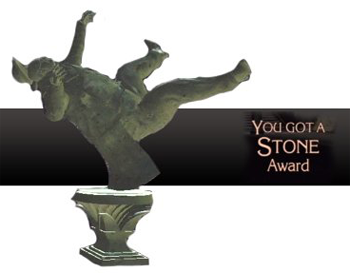 "Oh, what a day!"
"With trophies like that for the losers, who wants to be a winner?"
— Pac-Man, Pac-Man, "The Old Pac-Man and the Sea"
Advertisement:

Welcome, welcome, and thank you for playing TV Tropes! Applause!

Unfortunately, I'm afraid you're not our big winner here today, and so we have to say goodbye! Awwwwwwwww! But you're not leaving empty-handed! No, you're going home with our fabulous Consolation Prize! Fast Eddie, tell our lucky losing contestants what they've won!

That's right, our Consolation Prize is a nice little gift basket loaded with various and sundry household goods and items, maybe some store credit, and we'll even throw in the Home Game version of our own Game Show! Wow, look at that shiny box! Courtesy of Trope Co.®!

Thanx, Eddie! And before our grand champion starts feeling left out, let me remind everyone that the Consolation Prize is, by necessity, of inferior value compared to our show's real prizes. But at least it's not a Zonk. Now, off with you runners up, and let us bask in the glow of our real winner!

What, there's no year's supply of Rice-A-Roni, The San Francisco Treat? Ding! Ding! That's THE memetic Consolation Prize, you know...