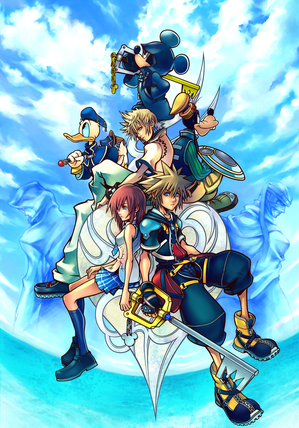 Kingdom Hearts II is the third game in the Kingdom Hearts Disney/Square Enix crossover franchise, released on the PlayStation 2 in 2005.

Following the events of the first Kingdom Hearts, a new breed of enemy has emerged from the shadows: Nobodies, the reanimated husks of the people whose hearts were stolen by The Heartless. Driven by an instinctual urge to be reunited with their hearts, the Nobodies are swarming over The Multiverse like a plague and leaving devastation in their wake. Behind this invasion is a group known as Organization XIII: the most powerful and self-aware Nobodies in existence, who plan to unseal the Heartless and take their hearts back by force, uncaring of the collateral damage this will cause.

Sora, the young Keyblade wielder who was once victorious over the Heartless threat, has recovered from his ordeal in Castle Oblivion and awakens from a long slumber to a new mission. Like before, he must travel through The Multiverse and use his Keyblade to protect the worlds that are invaded by the Heartless and Nobodies. But as he travels, multiple questions plague him: just who or what was responsible for ensuring his recovery from Castle Oblivion? What has happened to Riku and Kairi while he was asleep? And just what is his connection to Roxas, a blond-haired boy whose cozy life fell apart as Sora's was being rebuilt?

The group re-visits many of the Disney worlds from the first game, often experiencing more of the familiar plotlines (and, in case of Aladdin, the straight-to-video sequel) or exploring different parts of the settings. This leads to a rapid growth of Kudzu Plot and a lot of Retcons. Even though it becomes more and more convoluted over time, the story remains internally consistent. The game was followed by two prequels (Kingdom Hearts: Birth by Sleep and Kingdom Hearts: 358/2 Days) and two sequels (Kingdom Hearts coded and Kingdom Hearts 3D: Dream Drop Distance), which more or less cleared up the confusion of the plot in preparation for later installments.

In terms of gameplay, Kingdom Hearts II returns to a style more reminiscent of Kingdom Hearts after Kingdom Hearts: Chain of Memories made a number of alterations to be better suited for handhelds, though there have been significant changes. The platforming and exploration elements have been done away with in lieu of a more combat-focused game, with Sora's arsenal being much more diverse. A variety of combo modifiers, Combination Attacks with allies called Limits, and the ability to power up with Drive Forms provide many new ways to approach battles. Optional quick-time events called Reaction Commands also allow Sora to use special techniques against his enemies, making for even more flashy combat and allowing for cinematic moments during boss encounters.

Kingdom Hearts II has its own manga adaptation, which at certain points goes even Darker and Edgier than the game.

Example of:
"Get Back Here!" Boss