This page contains unmarked spoilers from all previous games. You Have Been Warned! 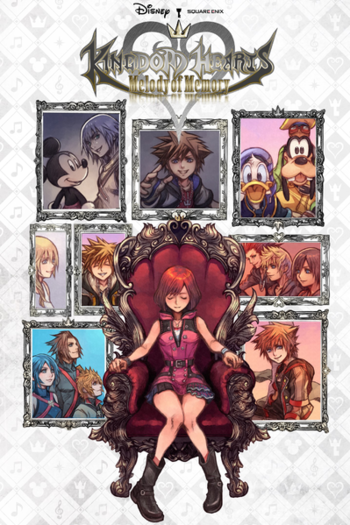 Melodies and memories hold the secret of his final plan.
Advertisement:

The thirteenth (excluding remakes) game in Disney and Square Enix's Kingdom Hearts series, Kingdom Hearts: Melody of Memory is a Rhythm Game Spin-Off that continues the story from Kingdom Hearts III and its DLC Re Mind, and is the first major release in the second Myth Arc of the series, the Lost Master Arc. It is co-developed by indieszero, the team responsible for Theatrhythm Final Fantasy.

One year has passed since the Final Battle with Master Xehanort, with the χ-blade relinquished and Kingdom Hearts locked away once more. But while peace in the Realm of Light has been secured, it came at a terrible cost: the disappearance of Sora, who sacrificed himself to revive Kairi after Xehanort seemingly destroyed her. Now, while Sora's allies scour The Multiverse for any leads to his whereabouts they can find, Kairi has entered a deep slumber to search for answers within her own heart, reflecting on journeys of times past. Will this trip down memory lane yield clues to reuniting with Sora? Or could it lead to something even more?

This Rhythm Game is set in Kairi's memories of Sora (and others) as they play each stage from past events in the form of rhythm stages. Players can relive past scenes and even unlock new cinematic cutscenes that set the stage for the next game.