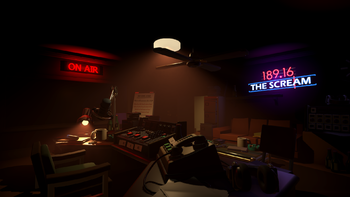 "We're now in the midnight hour, you're listening to 189.16 - The Scream with me, Forrest Nash."
Advertisement:

, for the PC. Made entirely from scratch in just two weeks and released on Gamejolt

You step into the shoes of Forrest Nash, a radio talk-show host working the night shift with your producer on the local radio station: 189.16 - The Scream, a struggling drab radio show in the quiet town of Gallows Creek.

While broadcasting the midnight show, a news report says there's been an escape from the penitentiary, a convicted killer that is now prowling the town. Your radio station gets three calls in from the killer's potential victims, who for one reason or another have been unable to contact the police.

You’re live on-air and three people are on the line.note In more ways than one. Are you ready to take the next call?