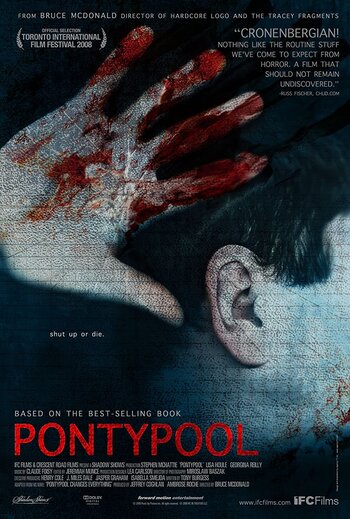 Shut Up or Die!
Advertisement:

A Canadian horror film from 2008, set almost entirely inside a radio studio in the town of Pontypool, Ontario. Swaggering shock jock Grant Mazzy (Stephen McHattie) has just been hired by the local radio station, and this particular day sees the snowstorm from hell descend on Pontypool. After a strange encounter with a nonsensical woman who staggers off into the storm, he gets to work - immediately butting heads with producer Sydney Briar (Lisa Houle), who's assisted by staff member (and Afghanistan vet) Laurel-Ann Drummond (Georgina Reilly).

Then, a Zombie Apocalypse (of sorts) begins. Trapped in the snowstorm, the three try to keep track of the situation through the radio, and eventually face a siege.