Do with Him as You Will 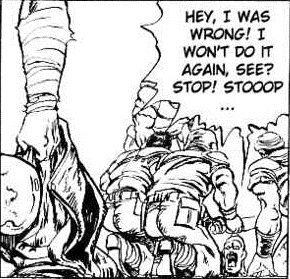 "Stop begging. You Are Already Dead."
"He's all yours."
— Iron Man (dropping a terrorist before his victims), Iron Man

Slaves, oppressed citizens, abused prisoners, terrorized villagers, tortured laboratory subjects, and the families of the victims are the most commonly used. Because of the inherent setup of empowering powerless people against their oppressors, the Hero doing this may often have Bully Hunter tendencies.

Sometimes, an Anti-Hero will do this as a form of Cold-Blooded Torture, usually as a means to deliver a Cruel and Unusual Death without doing the dirty job on his own.

Can result in the villain being Torn Apart by the Mob.

Compare Murder by Inaction. Differs from The Dog Bites Back in that that is a form of Karmic Death, while with this one, the hero deliberately sets it up. A subtrope of Throw 'Em to the Wolves.

As a way for a villain to meet their demise, this can easily be a Death Trope. Expect unmarked spoilers.