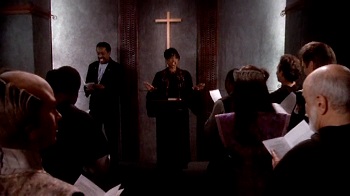 A Babylon 5 Gospel sing-along
Well, I went to the rock to hide my face, and the rock cried out, "No hiding place!" There's no hiding place down here!
-Gospel Singer
Advertisement:

Ivanova gives a rundown of the current situation: shipping out telepaths as fast as they can, Sheridan practically living in the War Room, Franklin on Walkabout still, and G’Kar sending Narn bodyguards for each telepath.Not everyone is happy to have G’Kar, though. Londo decides it’s time to deal with the Narn. Since Sheridan has granted him sanctuary, Londo intends to lure him away from the station and back to Narn.

Ivanova joins Brother Theo in the docking bay where they are waiting for some guests. Theo says to pardon the grinding of his teeth as a group of religious leaders, led by the Reverend Will Dexter, come aboard.

Delenn: No wonder you are cranky.

He's been foregoing food and rest, and Delenn has to force him to come since she already said he would meet them and he doesn’t want to make a liar out of her.

Vir informs Londo that Lord Refa is back in the station, along with Minister Virini. Londo sends Vir to tell G’Kar that he has information on the whereabouts of Na’Toth, his former aide. That she’s being held on Narn, which will draw G’Kar there, where he can be captured. Vir is reluctant, but Londo threatens him and his house and family if he doesn’t.

Refa and Virini talk about Londo, and the minister notes that they used to be allies but now they are rivals. The emperor want the schism between two of the oldest noble houses to end. He’s come here to decide which of them is more deserving of his support.

Vir meanwhile slowly makes his way to G’Kar’s quarters, and brings the information as Londo now meets with the minister who tells him much of what he told Refa. The emperor has no preference, he just wants the matter settled. Vir comes in and says he’s done what Londo asked. Londo then asks if he could rid the court of an embarrassing problem if it would win the emperor’s favor, and Virini says it might. As they leave, Vir loudly protests.

Sheridan is at a dinner with Dexter’s group. They have brought information with them, datacrystals containing transmissions from the government and a lot of the underground, proving they’re still around, no matter what ISN says.

G’Kar seems to have taken the bait as he asks Garibaldi to find a way to smuggle him onto Narn. Garibaldi reminds him there’s a standing warrant for his arrest, but G'Kar insists. He just needs a ship to slip in and wait a few hours. And he wants it immediately.

That night, Dexter finds Sheridan in his office going over station reports. He’s surprised to find Sheridan still working at this hour, and begins to wonder who he has to share it with. Sheridan tries to evade for a while but Dexter reminds him that after God made Adam he created Eve. Sheridan is reluctant to pull Delenn in, as she has problems of her own. Dexter gets up to leave, but not before reminding Sheridan that sometimes problems are lesser with someone else.

The next day, on the Narn homeworld, G’Kar is looking over the devastated scenery. One of his contacts meets with him, and he tells them where they will be going. Not far away, Refa is looking over a recreation of the Centauri palace. He makes arrangements to intercept G’Kar that night. With the last of the Kha’Ri captured, the glory to Refa’s house will tip the balance.

Sheridan knuckles under and invites Delenn to help him figure out the Shadow’s tactics, but even with her help little progress is made. There seems to be no pattern to the attacks but as they run the sequence again they suddenly notice one sector which has been consciously avoided. Delenn tells him many refugees have been going there, and he figures the Shadows are preparing for a major strike with a lot of impact that will spread terror and demoralize them, something he’d do in their shoes. Delenn is taken aback, and when he talks about having to think like the enemy, she decides he’s had enough and drags him out of the War Room.

On Narn, G’Kar begins to move, while Londo gets Vir away from Refa’s people. Refa’s men find G’Kar and Refa takes the opportunity to gloat, while back on the station, Reverend Dexter’s service gets started, warning them against listening to those who would turn them against each other.

Refa orders his men to take G’kar, but they don’t move. When he asks what they're waiting for G’Kar says, "This," and produces a small holoprojector which plays a recording from Londo.

Londo: Hello Refa. If you are seeing this message it is because in a very few minutes you will be dead.

Londo had made an elaborate plan to trap Refa here without any allies, and begins listing Refa’s offenses, taking that which he loved from him, having Prime minister Malachi murdered, threatening his position, and weakening Centauri Prime’s defenses with his constant wars.

In addition, he gave G’Kar documents proving that Refa authorized the Mass Driver attack on Narn, and was personally involved in the creation of death camps, and the murder of several million Narns. And just in case, Londo has arranged for the release of two thousand Narns for this. Furthermore, he has arranged all this to disgrace Refa’s house by making it seem like they were involved with the Narns. Londo bids Refa farewell then the image vanishes and the guards walk away.

G’Kar plants a datacrystal on Refa and warns the other Narns to leave his head and face intact for identification. The rest is theirs.

As a lively Gospel tune is sung back on station, a panicked Refa tries to run with angry Narns closing in from all sides, eventually cornering him and beating him to death. “No Hiding place down here.”

Back on Babylon 5, Londo presents the datacrystal to Minister Virini, accusing Refa of collaborating with the Narns in a bid to increase his own power. Virini thanks Londo for the information and dismisses him.As he walks off, Vir lets him know that he is not happy with what he did.

Vir: I used to think I knew you, Londo. But I never knew you at all, did I?

In hyperspace, Delenn has the White Star bring Sheridan to see what they can do now that they know where the Shadows will strike. Before Sheridan’s astonished eyes, an entire fleet of White Star class ships is arrayed. He's speechless, but Delenn tells him not to say anything. They look at each other for a moment then draw together and kiss.