Tell them, that from this place we will deliver notice to the parliaments of conquerors that a line has been drawn against the darkness. And we will hold that line, no matter the cost.
—Captain John Sheridan 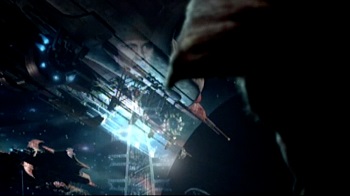 That's right Londo, you made this possible.
Advertisement:

A number of meetings are taking place, one on Centauri Prime, where Londo and Lord Refa meet up, and another on Babylon 5, where Delenn suddenly starts smiling as a light fills her quarters and boisterous laughter is heard. "Hello, dear friend."

Sheridan has just gotten out of the shower when that light appears and Draal, keeper of the Great Machine stands before him. He invites the captain down to the planet to talk.

Another meeting is between G'Kar and his uncle G'Sten. G'Sten is there because the war is not going well, and if nothing changes soon, the Centauri will be victorious. They have one chance, the Centauri supply depot at Gorash 7. The assault will leave the Narn homeworld vulnerable as it will take the entire fleet to do it, but if they're quick, the Centauri are going to have to take a long while to rebuild their invasion infrastructure, which will give the Narn time to rally some help and additional defenses, which is what G'Sten and the Kha'ri are banking on... and leaves G'kar feeling extremely anxious.

The Centauri already know about the planned attack and Refa wants to make the most of it and call G'Sten's bluff: the Centauri will assault the Narn homeworld directly. Londo points out that if they just plunge toward Narn, the Narn fleet will just turn right around and then the Centauri will be up to their necks in their own blood, which is why Refa wanted to speak with Londo: he asks Londo to arrange for the outpost to be defended by Londo's "associates". Between keeping the Narn busy and possibly destroying much of the fleet outright, it will give them plenty of time and room to enact the obliteration of Narn.

Yes, obliteration. Refa and much of the rest of the militant wing of the Centaurum are done messing around, and have no intention of trying to conquer an intact Narn again like last time. This time, the Narn will be at the Centauri's feet and "will be kept there"... by using orbital mass drivers to devastate the planet into either surrendering or otherwise. Londo, although growing increasingly horrified by the scope of the plan, ultimately agrees with extreme reluctance, though he states Mr. Morden and his associates are beginning to worry him, and he says this is the last time.

Sheridan and Delenn are preparing to leave, but Garibaldi is not happy about it, and even more so about them going alone. They are both determined, and eventually he relents. As they set off, Londo and Refa also depart for the Narn homeworld.

On the station, Franklin shows G'Kar a Narn who was interrogated by the Centauri about defenses around the Narn homeword and also has information about Centauri ships being sent away without explanation. He mentions how the Minbari bypassed several Earth colonies during their war and went straight for Earth itself, and he thinks the Centauri are doing something similar.

Sheridan and Delenn arrive on Epsilon III, Delenn guiding the way to the Heart of the Machine.

G'Kar calls G'Sten and tries to persuade him to call off the attack and defend the homeworld, but they're too far along now.

Sheridan and Delenn finally reach the Heart and find Draal there. He compliments Delenn's new look and mentions Sheridan's involvement in a conspiracy of light. Sheridan tries to feign ignorance but Draal assures him his secrets are safe here.

In his quarters G'Kar is praying as the Narn fleet emerges from hyperspace. They are quickly met by Shadow vessels which begin decimating the fleet, eliminating most of them in a matter of minutes. The few remaining try to retreat into hyperspace, but their jump points are destabilized by energy emissions from the Shadow vessels and collapse on them crushing the ships caught in them. G'Kar opens his eyes and extinguishes a candle.

Draal is explaining what life is like on Epsilon III when he suddenly pauses, saying he's picking up a flurry of signals and then tells them to get back to the station. Before they go, he tells Delenn he thinks it's time to introduce Sheridan to the others. After they leave, he calls to one of the Great Machine's tenders:

On station, Ivanova informs Garibaldi of the assault on the Narn homeworld, and tells him to be ready to lock down the station. Meanwhile, ISN starts reporting on the bombardment. As a crowd in the Zocalo watches, an angry Narn decks a nearby Centauri and a riot breaks out. Sheridan and Delenn arrive on the station to the sound of emergency sirens and he orders security to escort her to her quarters while he goes to C&C.

At the Narn homeworld, Londo watches in horror as the Centauri fleet uses mass drivers to hurl asteroids down on the planet creating huge explosions and clouds of dust that are seen from orbit.

The attack lasts for days, as the station is locked down with only armed security guards patrolling the corridors. G'Kar manages to get in touch with home, only to find that the Kha'Ri intend to surrender - it's either that, or it seems the Centauri really will go through with killing everyone on the surface of Narn. But before that, they have one last order for G'Kar - "the hardest one [we] have ever asked of you". Soon after, he slowly makes his way into Sheridan's office and requests sanctuary.

Londo arrives on station and arranges a meeting of the League of Non-Aligned Worlds. At the meeting, he announces the Narns' unconditional surrender. He then begins listing the terms of the surrender: The Kha'Ri will be disbanded and the members subject to arrest and trial. Sheridan requests Earth be allowed to send observers, but is denied.

Second, any Centauri murdered by a Narn will result in the execution of five hundred Narns, including the perpetrator's family.

Third, a council of the Centauri's own choosing will be set up to govern Narn. And finally, the last of the Kha'Ri, G'Kar will step down as ambassador and return to Narn for trial. Sheridan refuses this on the grounds that he has agreed to allow G'Kar sanctuary. Delenn quickly backs him up and Londo relents, but insists that G'Kar be removed from the proceedings. Sheridan says they will wait...

There is stunned silence as the two glare at each other then look at G'Kar, who slowly rises and begins to speak.

G'Kar: No dictator, no invader can hold an imprisoned population by force of arms forever. There is no greater power in the universe than the need for freedom. Against that power governments and tyrants and armies cannot stand. The Centauri learned this lesson once. We will teach it to them again. Though it take a thousand years, we will be free.

After the meeting, Londo watches the news report on the surrender and the Centauri victory celebration, as well as their plans to annex several other worlds, provoking fears of expansionism.

Sheridan meets with G'Kar and offers help in any way he can, and G'Kar accepts. Sheridan is then asked to meet Delenn in the conference room.

He arrives to find a large group of people who she introduces as the Rangers, and have been assembled to fight the Shadows. They were under the command of Delenn, but she now offers joint command to Sheridan and he accepts, promising to draw a line against the darkness and hold it no matter the cost.