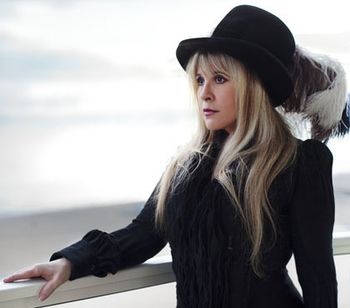 Well maybe I'm just thinking that the rooms are all on fire,
Everytime that you walk in the room.
Well there is magic all around you, if I do say so myself,
I have known this much longer than I've known you.
— "Rooms On Fire"
Advertisement:

Stephanie Lynn "Stevie" Nicks (born May 26, 1948) has been the lead singer off-and-on for Fleetwood Mac for over four and a half decades (since New Year's Day, 1975). She has worked intermittently as a solo artist since 1981, having by far the most commercially successful solo career of any current or former Fleetwood Mac member, and also the most prolific, with seven albums (so far) of new material, two greatest-hits compilations, one box set (a mixture of greatest hits, B-sides, previously unreleased songs and demos), one album of fully-finished versions of demos created throughout her career, and one live album, as well as numerous videos.

Her albums so far are:

The following tropes have been observed in the life and career of Stevie Nicks: