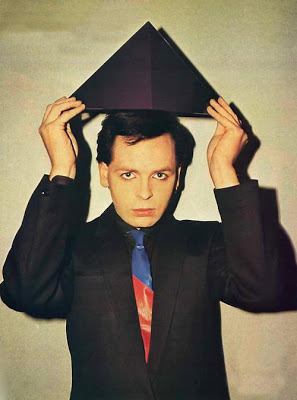 You know I hate to ask,
But are 'friends' electric?
Only mine's broke down,
And now I've no-one to love.
"Are 'Friends' Electric?"
Advertisement:

Gary Anthony James Webb (born 8 March 1958), known professionally as Gary Numan is one of the founding fathers of Synth-Pop, best known, at least in the U.S., for his song "Cars".

He began his career under the band moniker Tubeway Army, their early Punk Rock singles recorded with the sole intent of becoming famous. He discovered a Moog synthesizer in the studio, and he was so impressed by the sound that he incorporated synths into his music with their first Self-Titled Album, slowly transitioning his style to that with which he did become famous. Their second album, Replicas, broke them into the mainstream in the U.K., aided by Gary's striking Robot or Spaceman Alter Ego; "Are Friends Electric" was one of the first Synth-Pop singles on Top of the Pops, pissing off some other synth-based bands that were well established before him. He dropped the Tubeway Army for his third album, The Pleasure Principle, which gave his sole U.S. hit "Cars".

Following his fourth album, Telekon, Gary began incorporating Jazz and accessible pop sounds into his albums, and his chart success waned. He hit his personal nadir with 1992's Machine and Soul, after which he dropped the feeble attempts at chart success and transitioned to a Dark Wave / Industrial Rock sound with Sacrifice, which persists to this day.

Numan also contributed the theme song to the 2014 video game The Evil Within, titled "Long Way Down

"It's the only way to live in tropes":