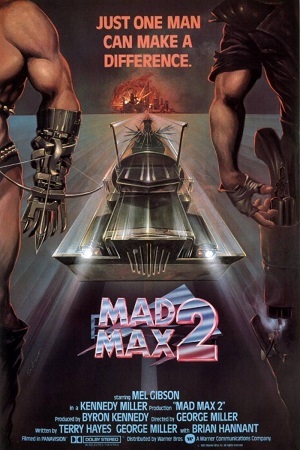 Do you come from a land down under? Where guzzoline flows and gets squandered.
My life fades. The vision dims. All that remains are memories. I remember a time of chaos. Ruined dreams. This wasted land. But most of all, I remember the Road Warrior. The man we called "Max".
Advertisement:

The second Mad Max film, released in 1981. It was retitled The Road Warrior for the American market, and is also known as simply Mad Max 2.

The movie follows Max into the anarchic wasteland that used to be Australia, where a few years later he is now Walking the Earth with his Post-Apocalyptic Dog in his Cool Car. He runs into a small ragtag group of survivors occupying an isolated oil refinery, who are surrounded and terrorised by a vicious gang of bandits led by the mysterious masked Lord Humungus. After at first resisting their pleas for him to help them, Max ends up assisting them in their plan for escape to the north, exorcising some of his own personal demons.

2015's Mad Max: Fury Road borrows a lot from this film, more than it does from any other Mad Max film.

"And the Road Warrior? That was the last we ever saw of him. He lives now... only in my memories."
Feedback