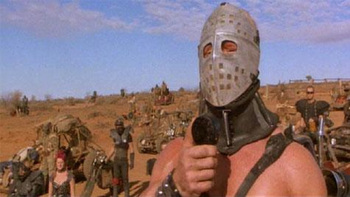 "Enough blood has been spilt. Just walk away."
"I am your redeemer! It is by my hand you will rise from the ashes of this world!"
—Immortan Joe, Mad Max: Fury Road
Advertisement:

The Wasteland Warlord is the powerful, autocratic leader of a faction in your Standard Post-Apocalyptic Setting. Much like real-life warlords in many war-torn regions, failed states, or other chaotic areas of the world, the Wasteland Warlord usually attains power by force and by commanding the unwavering support and loyalty of their followers. In the power vacuum left by the collapse of civilization, the Wasteland Warlord often fulfills the closest thing the setting has to a functioning government, providing their followers with resources, security, stability, a sense of purpose, or even the promise of a rewarding afterlife.

Unlike an Evil Overlord, the Wasteland Warlord may not necessarily be villainous (though they often are). Sometimes they can be benevolent, and even provide a safe refuge for the last remnants of humanity in a wilderness otherwise overrun by zombies, mutants, demons, monsters, killer robots, et cetera. But one thing almost all Wasteland Warlords share is that they are not afraid to resort to brutal methods in the name of survival. After all, the post-apocalyptic wasteland is an unimaginably harsh and unforgiving world, and only the toughest and strongest will survive to see the next day, let alone have any hope of one day rebuilding civilization.

Compare and contrast with Wasteland Elder, who tends to be more of a mentor or advisor than the one in charge (or if they are in charge, tend to be a lot more benign and less despotic). Also contrast with Disaster Democracy, where the faction's leadership is far more democratic and egalitarian. If the post-apocalyptic setting features a conflict between a good faction and an evil one, the good guys will usually be the ones practicing some form of democracy, while the bad guys will be the ones led by a warlord.