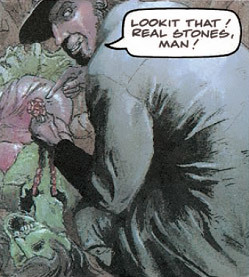 Isabela: Don't forget to loot the bodies!
Hawke: Do I ever?
— Dragon Age II
Advertisement:

The taking of property from a grave, tomb, or the person of an actual corpse itself. While objectively practical, this is generally frowned on because 1) it's unsanitary, and 2) it's considered extremely disrespectful in most cultures. And it's an easy way to set off an Indian Burial Ground.

Most often the theft happens because the property in question has great value, or the thief has great need of it, despite cultural requirements to inter it with the body. (When the property is considered legitimately removed, see Personal Effects Reveal). As such, the act occurs most under dramatic circumstances, making it a premium storytelling device.

However, at other times the stolen item itself might not be of that great value. For instance, the character might take a piece of food from their victim to show further disrespect, their cavalier attitude to death or killing or to emphasize their pettiness.

People in an emergency situation, especially an apocalypse scenario, will procure what they need to survive wherever they can, and while the issue of morality may arise, it typically loses to pragmatism. Similarly, it's very common for soldiers to take equipment, both from the enemy dead and their own. This is typically accepted, as they need the equipment, most of their allies' gear is technically considered the property of their military organization, and they are not inclined to care about the dignity of the enemy. In a war setting, this is usually at least implied to be The Scrounger's primary source of supplies.

In fact, this trope perhaps crops up most frequently in video games and tabletop games, where it is a reliable way to reload on ammunition and acquire new weapons (wherever they aren't using Unusable Enemy Equipment, that is). Other games simplify the issue by having enemies spontaneously produce useful items upon death.

However, specifically killing someone in order to take their property is a very different kettle of fish, falling rather under the more mundane heading of aggravated robbery.

This form of grave robbery is also in the purview of an Adventure Archaeologist, who will justify his deeds with the claim that It Belongs in a Museum (This position is undergoing increasing scrutiny at present, with many cultures decrying what they see as both the desecration of their ancestors and the theft of their history).

Do not confuse with Grave Robbing, which is the theft of the actual corpse, or a part of such.

Can easily overlap with Battle Trophy or Creepy Souvenir. If the item is bequeathed by the deceased, see Take Up My Sword or I'm Dying, Please Take My MacGuffin, or more generally, Will and Inheritance Tropes. May be presaged by the thief with the comment, 'If You Die, I Call Your Stuff'.

During the pay route of Barg'N-Mart, you have to take money off a corpse of a Jellien victim.

During the pay route of Barg'N-Mart, you have to take money off a corpse of a Jellien victim.