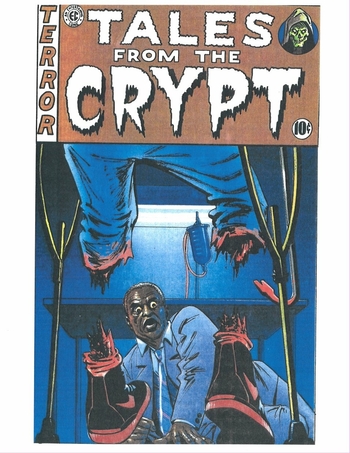 In this case, the Lord strongly taketh.
Crypt Keeper: (throwing skulls into a basketball hoop, which shatter on impact; wearing a basketball jersey and armbands) There you are, sports-fiends. You know, dead people like me make excellent point guards. When we can't get off a shot, we simply pass... away, that is. (tosses another skull into the hoop; he cackles) Speaking of which, allow me to be your fear-leader for tonight's half-time show. It's a putrid playlet about my personal favorite sport: being a mortician. I fittingly call it: Fitting Punishment.
Advertisement:

Following the death of his parents in a car crash, teenager Bobby Thorntonberry is sent to live with Ezra Thorntonberry, his uncle and only living relative. Ezra is a despicable old miser who runs a funeral home and cuts every corner he can, stealing gold teeth from bodies, using water instead of embalming fluid, and ordering cheap caskets from Taiwan that are six inches shorter than those made in the U.S.

Ezra demeans and verbally abuses Bobby while constantly (mis)quoting the Bible, makes him sleep on a gurney in an unlit closet, and starts to teach him about the funeral business. Bobby's "mistake" in ordering a casketnote Ezra had ordered a pine casket instead of oak, like the customer wanted, even though Bobby insists he told Ezra "oak" leads a potential customer to take his business elsewhere, and a furious Ezra retaliates by beating Bobby with a crowbar. The assault leaves Bobby paralyzed from the waist down, and Ezra finds himself saddled with escalating medical bills.

As Bobby hobbles up the basement stairs after cleaning up one night, Ezra throws his prized basketball at him, knocking him back down the stairs and killing him. Not wanting to waste money on a casket, Ezra decides to use the one Bobby ordered - only to find that Bobby is too tall to fit into it. He saws off Bobby's feet to get around the problem.

Ezra's long-suffering assistant Clyde figures out that Bobby's death was no accident and quits. That night, Ezra's nap in his office is disturbed by a series of odd occurrences - a knock at the door, a dripping faucet, a light left on. He blames them on Clyde, but the combination of Bobby's basketball bouncing down the stairs and the suddenly flickering basement lights throws a scare into him. A foot suddenly kicks him from behind, causing him to fall into the basement.

Ezra tries to get up but finds his legs paralyzed. He is shocked to see Bobby's severed feet walking down the stairs on their own, followed by his nephew's reanimated corpse, crowbar in hand. Ezra begs for mercy, but Bobby uses his own Bible-quoting habit against him, saying "Blood is thicker than water" before bringing the crowbar down on him.

Crypt Keeper: (wearing and tying the laces of Bobby's sneakers) Well, looks like old Ezra learned raising a teen is no walk in the graveyard. Now he's going to need one of his cheap coffins for himself. That's what he gets for having a name like "Ezra". As for poor Bobby, he got a pretty nasty case of athlete's foot, didn't he? I mean I've heard of footloose, but yikes! Oh, well. I guess the next best thing to making a goal is becoming a ghoul. Right, kiddies? (cackles)