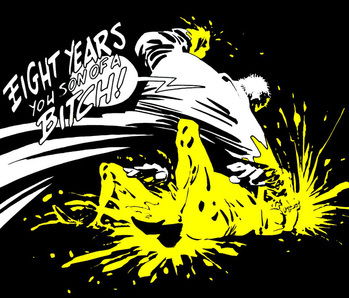 "After a while, all I'm doing is punching wet chips of bone into the floorboards. So I stop."
Advertisement:

A character has just killed someone, usually through a No-Holds-Barred Beatdown. They keep pummeling the body long after it's clear that the victim is already dead, either in a fit of Extreme Mêlée Revenge that hasn't cooled down, due to having far too much fun (marking the killer as Ax-Crazy), or simply due to a need to make sure the victim stays dead. Sometimes the fists or blunt implement is replaced with either bullets or a very sharp implement such as a knife or an axe.

Optional but common: an onlooker or friend pulls the killer back, repeats some variation of 'you can stop, he's dead', 'that's enough', or 'I think he's dead already' and may administer a Cooldown Hug. Although if you are dealing with dead bodies who won't stay down, such as The Undead or a Zombie Apocalypse, it could be reasonable to ensure they are truly dead.

Subtrope of Desecrating the Dead and There Is No Kill Like Overkill. Related in spirit to Beating A Dead Player and Kick Them While They Are Down.

open/close all folders
Anime & Manga
Comic Books
Fanfiction
Advertisement:
Film
Literature
Live-Action TV
Video Games
Web Comics
Web Original
In The New ‘’Ichika Whatever’’ Himari does this to the unnamed redhead girl Who sexually assaulted Ichika, She stops when she realizesthat she’s only punching bits of muscle to the ground
Western Animation