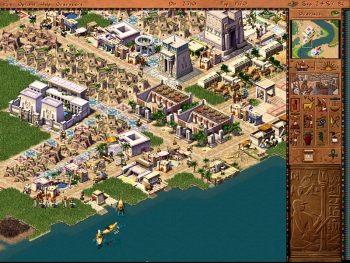 Pharaoh is a Simulation Game developed by Impressions Games and published by Sierra in 1999 and part of the City-Building Series. It's a sequel to the Caesar games. As its name implies, the game is set in Ancient Egypt, and in campaign mode it follows the exploits of several dynasties throughout history. You'll get the chance to construct massive Mastabas and Pyramids, battle against the Nubians, cultivate the fertile banks of the Nile, and even have to appease the various Egyptian gods to avoid retribution and receive blessings, or, alternatively, curses.

It received a minor Expansion Pack, Cleopatra: Queen of the Nile. Both can be purchased

Triskell Interactive and Dotemu are developing a Videogame Remake Called Pharaoh: A New Era for 2022. Although we don't know much about it yet, there has been a promise to maintain the Original Flavour, right down to featuring the original 1999 soundtrack by Keith Zizza and Henry Beckett, albeit re-recorded (as the original was in MP3 format) and with additional, original tracks by Louis Godart.