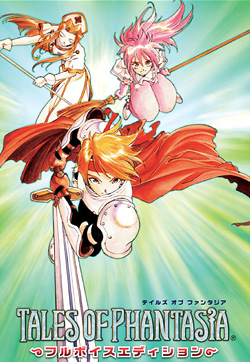 "If there is evil in this world, it lurks in the hearts of men."
—Edward D. Morrison

Tales of Phantasia is the first game in Namco's Tales Series, debuting on the Super Famicom in 1995.

The story begins when best friends Cress Albane and Chester Burklight return from a hunting trip to find that their entire village has been destroyed, and their families slaughtered. Swearing of revenge is imminent.

It turns out that the culprit needed Cress' heirloom pendant to unlock the seal on Dhaos, the legendary Demon King. Picking up a White Magician Girl (Mint Adnade) and a guide (Trinicus D. Morrison) along the way, Cress and company arrive just in time to see the seal broken and Dhaos freed. Unfortunately, Dhaos is only vulnerable to magic, and the World Tree that powers magic has been dead for a century.

With the last of his powers, Trinicus flings Cress and Mint a century into the past, where they land in the middle of a world war between the human country of Midgards and the evil forces of Dhaos. As Cress and Mint are unable to use magic, they recruit a half-elf witch called Arche and a human summoner called Claus F. Lester. Together, they must figure out a way to Save the World and defeat Dhaos once and for all.

Some stuff that became common themes throughout the series started here. Arche kicks off the Tales Series' fine tradition of exploring racism through elves. Claus redefines long-distance relationships with the help of the Spirit of Creation. Dhaos sets the standard for Tales Series villains as Well Intentioned Extremists. Also, there's a minor time paradox in there.

Phantasia played many RPG tropes straight, but on the technical side, it was nothing short of a marvel. Programmer Hatsuya Hiroshiba found a way to fit full voice acting for all the moves and spells and a full opening song into the plucky Super Famicom cartridge, with room to spare for brilliant arrangements of Motoi Sakuraba's gorgeous themes. The early version of the Linear Motion Battle System was a bit rough around the edges, but when the game was remade for the PlayStation in 1998, the control scheme was redone to fit Tales of Destiny's revamped "command" style, and all sorts of little extras were dropped in, from an extra character to little graphical coolnesses.

Phantasia also invented many of the series' set pieces. A huge number of the moves that later Tales Series swordsmen would use come straight from Cress' playbook. Phantasia also introduced the basic spell list, most notably the high-level magic "Indignation" (which comes with its own incantation too).

There was a remake for the GBA, which was the first version to get an official English release. While there are a few incredibly awful spots in the localization, such as the "Kangaroo War" for Ragnarok (apparently the result of a spell-check mishap)

and the poor quality of the voice casting and acting, most of the fanbase's issues with it are a result of Nintendo not taking... liberties... with the script that the best-known Fan Translation did. (If they had done so, the game almost certainly wouldn't have got by with anything less than an "M" rating.)

There are English patches for the SFC and PSX versions available online. There are also two versions for PSP, one being the "Full Voice Edition" and the other being paired with an Updated Re-release of the Game Boy Color sequel, Narikiri Dungeon. Recommended in general, but especially for people who liked Symphonia, just to play "spot the continuities." Unfortunately, neither version was released outside of Japan.

In 2014, however, an iOS port (based off the "Full Voice Edition") was released in September 2013 in Japan, which was followed by an English translation in January 2014. However, Namco Bandai eventually shut down the game servers and quietly pulled it from the App Store later in 2014, leaving the game completely unplayable. Namco Bandai cited poor response as its official reason (expected given what they turned the game into).

Due to Executive Meddling (most likely brought on by a desire to make the game better compete with the then newly-released Chrono Trigger,) the original development team schismed and mostly broke away from Namco after the game released, going on to reform into tri-Ace and create the Star Ocean series.

A four-episode OVA based on the game was created in 2004, and licensed and dubbed by Geneon three years later.

No relation to Disney's Fantasia.

Due to the fact that about a decade passed before a canon English translation was released, there's a bit of conflict about what some of the characters' names are. In order to reduce confusion, please use the official localized English versions of the character names, and not the DeJap versions. 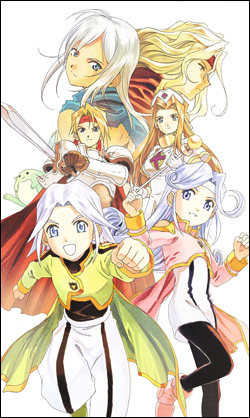 The story is set one hundred and seven years after the conclusion of Phantasia, and focuses on two twins named Dio and Mell. One day, the two twins are met by a mysterious woman who prophesies a "doomed future" for them both unless they complete the Ordeal of Spirits, a trial where they must seek out and test themselves against the twelve Summon Spirits of Aselia. While doing so, the twins explore the aftermath of Tales of Phantasia, travelling through time and space to speak with the alumni of Phantasia and uncover deeper insight into their thoughts and motives. The Updated Re-release adds another character to their party: Rondoline E. Effenberg, a mysterious time traveller looking for Dhaos, the Big Bad of Phantasia.

The key feature of the game was the ability of Dio and Mell to "dress up" as various character classes (Fighter, Thief, Mage, etc.), gaining new powers depending on which role they were portraying. Their wardrobe included the outfits of various Tales Series heroes and villains, and even cameos from various Bandai Namco Entertainment games. The concept proved so popular that it formed the basis for two more Narikiri Dungeon games, though they would be released under the Tales of the World banner.