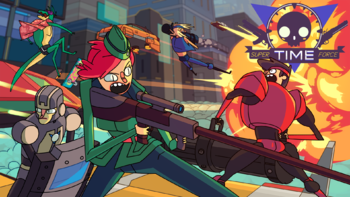 KOOKABUNGA!
"But wait...what if we...caused...all of this?"
"Sheah right! Unpossible! you didn't invent an army of pissed off robots did ya? No? then we're good here."
—Commander Repeatski and his past self, Game intro.
Advertisement:

Super Time Force is an action game created by Toronto-based developer Capybara Games. (The brains behind Superbrothers: Sword and Sworcery EP and Below) The gameplay is reminiscent of side-strolling run-and-gun games like Contra, but with the added ability of time travel. When you die or choose to "time out", you can rewind time back to any previous moment, at which point you can select another character and play from there, while your previous copies still perform their actions. This leads to situations where you rewind multiple times to add additional firepower or obtain normally out-of-reach items (Cloxs, Shards, and Glorbs) among other things.

The story begins in Philadelphia, during the year 1987. A man named Doctor Repeatski invents time travel, and immediately the world is overrun by robots. However, Repeatski's future self, now known as Commander Repeatski, comes back with the Super Time Force to save the day, and the days of other time periods. While at the beginning the player starts with three members of the force, French machine-gunner Jean Rambois, Scottish sniper Aimy McKillin, and shield-wielder Shieldy Blockerson throughout the training tutorial. New characters can be found and be unlocked in different time periods as well as with the amount of Shards and Glorbs that are collected in each level.

You can watch the game's animated trailers/shorts here

. This game is not to be confused with nor actually a videogame adaption of Power Rangers Time Force