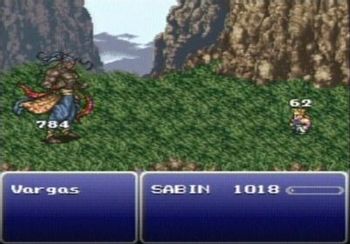 A fairly balanced fight in the world of RPGs.
"Btw, why do most J-RPGs' enemy stats gotta be higher than the party members? That's just weird."
— Deadpool lampshading this trope in Rakenzarn Tales
Advertisement:

Generally seen in Eastern Role Playing Games. When one compares the player's characters to the monsters (and bosses), they are essentially Glass Cannons to Stone Walls. Player characters tend to be able to deal out huge amounts of damage, usually well above their own HP's worth in a single hit. Monsters deal very low damage relative to their own HP. If the game allows for Player Versus Player combat, expect the damage to be scaled down immensely to prevent duels from being Rocket-Tag Gameplay. If the game has a Damage or HP cap, expect most late-game monsters to have HP above the player's damage cap, and well above the player's own HP cap.

There can be several reasons for this design:

In FPSes, scaling up both damage and HP is a legitimate way of increasing difficulty, since speed, reflexes and stealth are often a part of gameplay. They avert this trope more easily. Shoot 'em Up games play it straight, especially with boss fights (see also Damage-Sponge Boss).

Beware any Status Effects such as Confusion, charm, mind control, etc., which thanks to this trope are much more dangerous when used on the player due to the damage a confused PC can inflict.

This is also the root cause of Redemption Demotion, especially when considering how much the HP changes.

Aversions where both the player and enemies can be destroyed equally as fast become Rocket-Tag Gameplay. When both have health and/or defense so high it can only be slowly chipped away, it's Padded Sumo Gameplay.