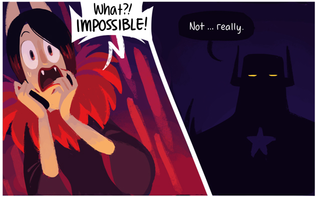 Technically, he's right.
I will maintain a realistic assessment of my strengths and weaknesses. Even though this takes some of the fun out of the job, at least I will never utter the line 'No, this cannot be! I AM INVINCIBLE!!!' (After that, death is usually instantaneous.)
— Evil Overlord List, Rule #24
Advertisement:

Stock phrase uttered by the villain when everything is going wrong, often soon after they declare that nothing could stop their plan, especially not those puny heroes (and the heroes have shown up to disprove the statement). They scream that it's impossible, despite the evidence staring them in the face. May be a sign of a Villainous Breakdown, or the villain's Last Words before Critical Existence Failure (or, on a more existential level, Puff of Logic). This phrase is often coupled with a Big "NO!". May be accompanied by an Oh, Crap!

This phrase is most commonly said by arrogant characters when the tables turn on them, especially Smug Snakes, Smug Supers and/or Arrogant Kung Fu Guys since they are, as a matter of fact, overconfident. Said types of characters will often shriek in disbelief when their arrogance ends up proving to be their Fatal Flaw by having them end up defeated by their opponents. "I can't believe it!", "How can this be?!", "You can't do this to me!", "This can't be happening!", "It can't end like this!" and "I cannot be defeated!" are among some examples of the best variations of this trope, and a good fan knows when it hits someone with Smug Snakery or Smug Superiority anyway. Also, in a classic fashion, most often after saying "This Cannot Be", a villain will vow vengeance by saying such phrases as "I'll get you next time!", "We Will Meet Again!", "I will have my revenge!", or even "You'll pay for this!"/"This Is Unforgivable!" before leaving to plot anew. Some villains are also prone to screaming this stock phrase when they're given a certain punishment for all their terrible atrocities as well as their own vileness.

Saying this line isn't completely exclusive to villains. A heroic character can also utter this when something shocking or horrible happens. Such a phrase may even be a sign of a Heroic BSoD. The phrase can also be uttered as an expression of surprise when another character actually succeeds in doing something that no one else has ever been able to do in the past. See also How Is That Even Possible?, often spoken in a tone of comical befuddlement rather than dramatic shock.

The equivalent Japanese phrases are "masaka" and "sonna bakana". Such words are used so much in anime, it's fairly common to hear "this can't be!" in English dubs. Monsters in Toku are prone to yelling this just before they explode.

This absolute flat-footedness and denial of reality is generally not found in villains who are Crazy-Prepared or capable of Xanatos Speed Chess.

A Sub Phrase of Oh, Crap!

This is often used when a villain is destroyed, humiliated, meets an unpleasant fate, or their Evil Plan is foiled. Therefore, beware of spoilers.