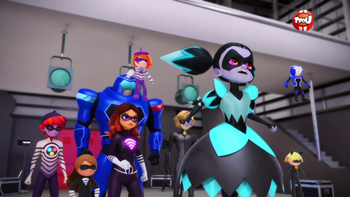 GIVE ME THAT LADYBUG DOLL! I'M GONNA GET YOUR MIRACULOUS!

While babysitting Manon, Marinette shows off she's made plushies of three villains, Ladybug and Cat Noir. Manon pleads with Marinette to have the Ladybug doll but settles for Lady WiFi when the Ladybug doll is damaged. When her mother confiscates the doll, however, Hawk Moth creates a new villain: The Puppeteer. The Puppeteer knows what Hawk Moth wants, and how to obtain it.