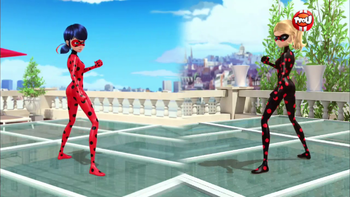 You can count on me, Hawk Moth. There will only be one heroine in Paris: me, Antibug!
"Antibug, I am Hawk Moth. Ladybug has let you down. I want her downfall too! So, shall we defeat Ladybug together?"
—Hawk Moth
Advertisement:

Sabrina's missing from school, and something invisible is attacking Chloé. It doesn't take long for Ladybug and Cat Noir to put two and two together, but Chloé insists on entering the fray in her Ladybug costume. Ladybug refuses to listen to Chloé's advice, which nearly costs her the battle when Chloé turns out to be right. This leads to Hawk Moth corrupting Chloé and turning her in a super villain. Ladybug needs to fend off Antibug with Tikki out of commission and Cat Noir out of his depth.

Hawk Moth turns Chloe into Antibug, an evil version of Ladybug with similar powers and an inverted color scheme.

Hawk Moth turns Chloe into Antibug, an evil version of Ladybug with similar powers and an inverted color scheme.