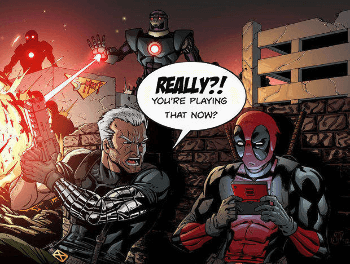 Bro, it’s a DS. Can’t you just close it?
"We could all have been killed — or worse, expelled."
— Hermione Granger, Harry Potter and the Philosopher's Stone
Advertisement:

Common sense tells us that tasks and goals which have severe consequences if they are ignored—such as avoiding death, obtaining food and shelter, taking care of your spouse and children, or not getting fired from your job—are more important than optional desires such as looking fashionable, not missing your favorite television program, obtaining some rare collectible, or saving a trivial amount of money. If there's some kind of emergency, you're supposed to drop everything and deal with it because nothing else is that important. Except there are certain people who seem to have it all backwards, ignoring serious problems while spending their effort on things that are relatively meaningless. They might risk their lives by running back into a burning building to save some easily replaceable possession, spend the money that they need for dialysis treatments on a flatscreen TV, or drive a hundred miles out of their way to fill up at a station where fuel is only ten cents cheaper. Usually, this is to underscore how obsessed they are with a particular object or subject, and it tends to be Played for Laughs as long as their foolishness only backfires on them. It's more difficult to laugh about when the character's skewed priorities cause permanent injury to another innocent person.

Can result in Disproportionate Retribution, And Then What?, or I'm Thinking It Over!. Compare with Arson, Murder, and Jaywalking. See also Honor Before Reason, Always Save the Girl and I Broke a Nail. Major Injury Underreaction and Comically Missing the Point could overlap with this (same can be said for Dramatically Missing the Point and Minor Injury Overreaction). Compare Bystander Syndrome, where everyone has Skewed Priorities. Compare This Is No Time for Knitting, where someone's apparent Skewed Priorities turn out to be on the right track after all, as well as Worrying for the Wrong Reason, where one character expresses some concern about a situation and another corrects them with a new concern. Advertising likes this trope, poking fun at the idea that their product is so awesome you should abandon everything else in favor of it. For when a character thinks social media is more important than safety, see Social Media Before Reason. The Indy Hat Roll is a high-speed example, if the item reached back for isn't actually vital. When the police do this, it's The Lopsided Arm of the Law.

This trope is a favourite of the Cloudcuckoolander, though anyone can be prone to it. See also Worst News Judgment Ever, for when it applies to the media.

Obviously Truth in Television, though due to how often it can happen, No Real Life Examples, Please!

Only Homer would be more concerned about his kids doing something to his car as opposed to raising the dead.

Is It Drawn Okay?

Only Homer would be more concerned about his kids doing something to his car as opposed to raising the dead.

Is It Drawn Okay?