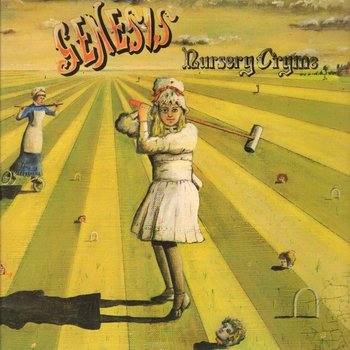 "Play me my song. Here it comes again."
"Play me Old King Cole
That I may join with you,
All your hearts now seem so far from me.
It hardly seems to matter now."
—"The Musical Box"

Nursery Cryme is the third studio album by Genesis, released through Charisma Records on November 1971. It was the first album to include Steve Hackett and Phil Collins, who filled in for Anthony Phillips and John Mayhew respectively after an extensive tour of the previous album Trespass. Although it had mixed reviews at the time and didn't sell well in its native UK until 1974, it had proven more successful in continental Europe, with the Italian tour in particular played in front of enthusiastic crowds. The inclusion of Collins and Hackett also solidified the band's identity as a Progressive Rock band for the remainder of the seventies.