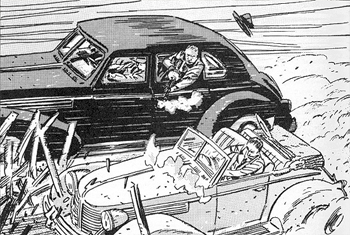 Why you should avoid the morning traffic.
"You know what this game needs? More helicopters."
— Deadpool, Marvel Ultimate Alliance 2
Advertisement:

The someone or something has run up against an enemy. It's time to do battle, just the heroes, and... a vehicle?

This is when someone has to go up against what essentially amounts to a vehicular foe. Maybe the Big Bad is too weak to just attack on foot, and does it from the protection of his vehicle. Maybe it's just a bunch of Mooks in a helicopter. Worst yet, the vehicle itself is the villain, either through malevolent AI or spiritual possession. In any case, the battle isn't between individuals or groups so much as between people.

The end result is that the heroes have an opponent that's faster, more durable, and deadlier than just an ordinary, squishy human. Furthermore, the villain(s) can usually take shots at the heroes, either by shooting at the heroes from the safety of their vehicle or by using weapons mounted on the vehicle itself. Failing that, there's always the old standby of Car Fu. Helicopters in this situation are rather liable to become makeshift blenders, whether or not the helicopter or its occupants have a better way of dispatching the heroes.

When this appears, there's usually three ways it'll play out:

Note that just a character killing a vehicle does not qualify it for this trope, nor does two vehicles duking it out with each other. The attacker must be fighting the victim from or with the vehicle for it to qualify. It can qualify for this trope if the victim does have a vehicle, but one which is at a severe disadvantage against the attacker's vehicle and can't fight off the attacker (jetpack versus spaceship, motorcycle versus helicopter, car versus helicopter, etc.). As a general rule, things like jetpacks and skateboards do not qualify as a vehicle.

Helicopters tend to be a particular favorite for this trope, but anything from a motorcycle to a spaceship can qualify. Also, while this trope is not limited to villains, it's considerably rarer to see heroic examples since it's one of the dirtier techniques in the book.

Pops up frequently in Video Games, though not uncommon in other media. Also Truth in Television; see pretty much any vehicle designed for combat purposes, or any crime where the weapon was a car or other vehicle.

Compare Vehicular Combat, where the emphasis is on the vehicles fighting each other, and Vehicular Sabotage, when a character's vehicle is maliciously tampered with before they drive it. Not to Be Confused with Car Fu, which is when the vehicle is turned into a makeshift weapon. However, the two are likely to overlap. Also related to Gangland Drive-By.